Since its opening in 1967, the collecting of objects and archival materials have enabled the Country Music Hall of Fame and Museum to build the world’s largest and most significant collection of materials documenting and preserving country music, its history, and culture from folk roots to the present. These collections are the foundation of our exhibitions, online digital archive, educational and public programs, publications, and are vital for study and research.

The Museum’s extensive Objects Collection includes nearly 500 musical instruments, more than 1,900 items of stage wear, personal clothing, and accessories, and thousands of other three-dimensional objects—from microphones to automobiles—documenting the history and culture of country music.

The Photograph Collection contains over 500,000 images related to the history of country music, from the 1920s to the present. The collection includes prints, negatives, and transparencies from professional photographers, publishers, talent agencies, and collectors.

The Print Material Collection comprises 5,000 linear feet and includes over 1,000,000 clippings and media press releases, covering over 4,500 country music performers and music-related topics. Holdings include a large collection of sheet music, periodicals, books, fan club newsletters, and pamphlets, from the 1800s to the present.

Founded in 1879, Hatch Show Print is a letterpress print shop owned and operated by the Country Music Hall of Fame and Museum. Using its collection of antique wood and metal type and hand-carved imagery, the print shop continues to operate as it has for over 140 years, creating limited-run posters designed and printed in-house.

The Country Music Hall of Fame® and Museum has in its holdings numerous cataloged photographs, moving images, sound recordings, printed materials, and objects related to the history of country and American folk music. 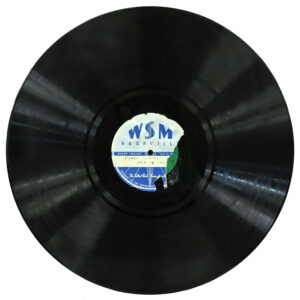 In 1982, the corporate librarian for the R. J. Reynolds Tobacco Company visited Nashville for the opening of the Museum of Tobacco Art and History. During his visit, he made contact with the staff at the Country Music Hall of Fame and Museum, and made us aware of the existence of hundreds of 16-inch acetate disc recordings of the Grand Ole Opry’s NBC network radio segment, the Prince Albert Show, sponsored by R. J. Reynolds. These had been held by the William Esty advertising agency since their first Prince Albert Show Opry sponsorship. By 1985, arrangements were made to donate more than 650 discs, along with any rights that R. J. Reynolds held in said programs.

Spanning the run of programs from the first broadcast in October 1939 to the last Prince Albert Show on December 27, 1960, the donation is a valuable document of the flavor of the show, the evolution of its cast and other changes at the Grand Ole Opry, and the changes in the public taste in country music during that time period.

The October 14, 1939, first network broadcast recording of the Opry’s Prince Albert Show was selected to be added to the National Recording Registry by the Library of Congress during the first year of Registry nominations in 2002.

The Frist Library and Archives has digitized the 16-inch acetate discs, and the programs can be listened to in our Digital Archive. 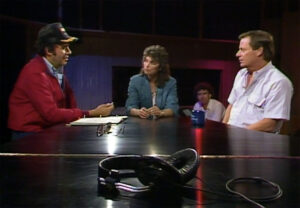 In 1983, a new all-country themed cable TV channel debuted, The Nashville Network (TNN). It featured original programming with a focus toward existing and new country music fans. During its prime, TNN was one of the most-watched cable networks in America.

One of TNN’s original programs was Bobby Bare and Friends. This show began in 1983 and ended in 1988 and consisted of seventy-two episodes. The program featured Country Music Hall of Fame member Bobby Bare as host and consisted of interviews and performances with impactful songwriters and artists in country music. These included Bill Monroe, the Judds, Tom T. Hall, Chet Atkins, Roger Miller, Harlan Howard, Jerry Reed, Emmylou Harris, and many others.

In 2008, all seventy-two one-inch video master reels were donated to the Country Music Hall of Fame and Museum and now reside in our Moving Image Collection.

The Frist Library and Archives has digitized all of the Bobby Bare and Friends episodes. Descriptions of the shows can be found in our Digital Archive, and the episodes can be viewed on-site in our Reading Room. 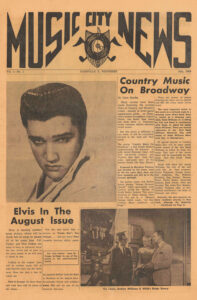 Music City News was founded by recording artist Faron Young, and its first issue was published in July 1963. Music City News established itself as a premiere trade paper for the country music scene in Nashville and beyond. Published monthly, it provided record charts, news of performing artists and their tour dates, and profiles on stars as well as the lesser-known figures working behind the scenes to enhance the genre’s popularity. The final issue of the magazine was published in February 2000.

As a testament to its renown, Buck Owens had a Top Ten hit in 1974 with “On the Cover of Music City News,” a variation of Dr. Hook’s pop hit, “On the Cover of the Rolling Stone.” In 1967, Music City News began holding its titular awards ceremony based entirely on votes cast by the magazine’s subscribers. The awards show was televised for the first time in 1978. In 1989, The Nashville Network and Music City News combined their awards shows, in what became an early iteration of the CMT Music awards.

The Frist Library and Archives has a complete run of Music City News issues. Digitization of the complete collection is currently underway. To view what we’ve digitized so far, please visit our Digital Archive.

Donate to the Collections

You are now leaving Country Music Hall of Fame

You are now leaving our website and onto another web property, which may include a different set of terms or conditions. We will open the website in a new tab for your convenience!

We use cookies in the following ways: (1) for system administration, (2) to assess the performance of the website, (3) to personalize your experience, content and ads, (4) to provide social media features, and (5) to analyze our traffic. You consent to our cookies if you continue to use our website. Please consult instructions for your web browser to disable or block cookies, or to receive a warning before a cookie is stored on your computer or mobile device. Read our Privacy Policy.